Heraklion is found on the northern coast of eastern Crete. The biggest airport on the island is on the outskirts of town, and the huge harbour provides connections to some of the many Greek islands, not to mention the Greek mainland.

Considering its size, Heraklion doesn’t have many hotels. The biggest and best hotels are located just outside the city centre, on Ammoudara Beach. One of the best and most family-friendly hotels is Agapi Beach Resort with an all-inclusive option. 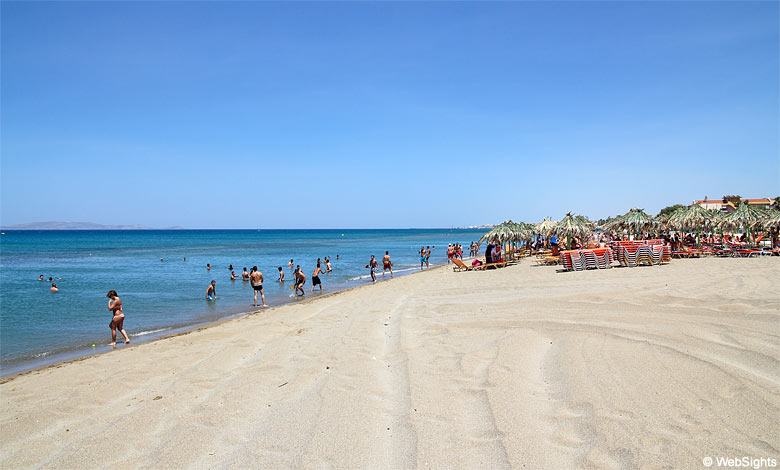 Ammoudara Beach
The centre of Heraklion isn’t home to any beaches, but just outside, you’ll find the long and gorgeous Ammoudara Beach. The four kilometres of beach that are closest to the city centre are covered in fine white sand, and there are only small areas with pebbles.

It’s possible to rent sun loungers and parasols from various places along the beach, usually from the beachside restaurants. These also tend to offer showers and toilets. The lifeguards have a few towers along the beach and are there to watch the guests throughout the high season.

Those who arrive by car will be able to park on the streets behind the beach.

Child-friendliness
The beach in Heraklion is relatively child-friendly. The sand is nice for playing in, and the same goes for the edge of the water. That said, the water does get deep quite quickly.

Water Sports
There are plenty of opportunities to try out different water sports, such as jet skis and banana boats. The best place to find these activities is around the middle of the long beach, near Agapi Beach Resort.

Beachside Restaurants
Various restaurants, cafés, and bars can be found along Ammoudara Beach. Many of them offer sun lounger rentals for their area, including Edem Island, popular with the younger population of Heraklion.

The City of Heraklion
With more than 140,000 inhabitants, Heraklion isn’t just the capital of Crete but also the largest city on the island. An exciting city with history, culture, markets, and lots of shopping.

The shopping street 1866—named after the Cretan rebellion—is a typical Greek shopping street with lots of small shops. Dedalou is home to a large selection of international shops, and the street ends in a cosy square with a popular Venetian fountain (see picture).

Some of the main attractions in Heraklion are the archaeological museum, Agios Minas Cathedral with space for up to 8,000 people, and the Venetian harbour by Koules Fortress (see picture). The single biggest attraction is Knossos, which can be found a few kilometres south of the city centre.

Map of Heraklion
The right side of the map shows Heraklion’s centre and large harbour. The left side shows Ammoudara Beach, which stretches for almost six kilometres.

We use cookies on our website to give you the most relevant experience by remembering your preferences and repeat visits. By clicking “Accept All”, you consent to the use of ALL the cookies. However, you may visit "Cookie Settings" to provide a controlled consent.
Cookie SettingsRead MoreAccept All
Manage consent

This website uses cookies to improve your experience while you navigate through the website. Out of these, the cookies that are categorized as necessary are stored on your browser as they are essential for the working of basic functionalities of the website. We also use third-party cookies that help us analyze and understand how you use this website. These cookies will be stored in your browser only with your consent. You also have the option to opt-out of these cookies. But opting out of some of these cookies may affect your browsing experience.
Necessary Always Enabled
Necessary cookies are absolutely essential for the website to function properly. These cookies ensure basic functionalities and security features of the website, anonymously.
Functional
Functional cookies help to perform certain functionalities like sharing the content of the website on social media platforms, collect feedbacks, and other third-party features.
Performance
Performance cookies are used to understand and analyze the key performance indexes of the website which helps in delivering a better user experience for the visitors.
Analytics
Analytical cookies are used to understand how visitors interact with the website. These cookies help provide information on metrics the number of visitors, bounce rate, traffic source, etc.
Advertisement
Advertisement cookies are used to provide visitors with relevant ads and marketing campaigns. These cookies track visitors across websites and collect information to provide customized ads.
Others
Other uncategorized cookies are those that are being analyzed and have not been classified into a category as yet.
SAVE & ACCEPT